Every time the season changes, I get a little bummed.
When I get used to doing something a certain way, it takes a while for me to adjust.
As last winter approached, I worried that the colder temperatures and rain would prevent me from running outside a lot of the time, I worried that every run would have to be on the treadmill, or that I would hate running in winter gear. A few weeks later I was completely used to it and loving it, the cold air is great to run in.
Then spring came, and of course I had a whole bunch of new reasons to be worried: hot temperatures that wouldn’t allow me to run far or fast, a strong sun that would bother my eyes and burn my skin, etc.
Sure, I can be a bit dramatic sometimes, but I am a worrier like that.


Now that it’s been warm for some time here, I want to share some of what helped me plan my running better in hot temperatures:


Check the weather: If you are able to know in advance when you’ll be running, check the weather so you can plan accordingly. Sometimes even a half hour can make a big difference in temperature and humidity level. Try to schedule your runs for a time when it’s cooler such as early morning or late in the afternoon or evening. Take into consideration the actual temperature, humidity level, wind, and if the sun is out (as opposed to night or overcast skies).

Plan your route: Where you run also makes a big difference in temperature. If you are running during the day, try to find a shaded route. An open area with trees and breeze will always be cooler than running in the city, keep in mind black asphalt absorbs heat and adds a few degrees to the already warm temperatures.

Drink a lot: This is the most obvious tip and one we all know already, but it’s the most important one too, so it really can’t be stressed enough: we need to drink a lot when running in hot weather. Drink before your run, during, and after. I am the first to admit that I don’t like to drink a lot before my run (it makes me want to pee) or during my run (it makes me want to pee, plus my stomach feels full and heavy), but in warm days drinking only after I’m done running is just not enough. I try to drink plenty during the day so I’m fully hydrated for next day’s morning run, but I also drink before I start running, and I’ve been practicing with drinking during longish runs.

Protect yourself: Wear light, airy, sweat wicking clothes, to keep as cool as possible. This will make a huge difference on your performance and how you feel during your run. Wear a hat or visor to protect your head/face/eyes from the sun. And don’t forget to apply sunscreen in all exposed areas, even early in the morning the sun burns, especially when we are wet with sweat.

Pick your shoes: I read this tip somewhere and thought it was brilliant.. how did I not think of this before? Feet swell on hot weather, especially during long periods of exercise. If you are running over an hour, pick your airiest pair of shoes.

Adjust your training: Hard runs are not suitable for hot weather. If you are planning on doing some serious speed work, see in advance if there will be a cooler day during the week, and schedule that run for that day, or for cooler hours. Keep your runs on warm weather light or moderate effort. If you are racing, remember that higher temperatures will mean a slower run, so readjust your paces and goal time accordingly.

Refuel: Eating and drinking as soon as possible after running not only promotes muscle recovery, but also assists our bodies to regain the right balance of minerals lost through sweat. Experiment with what works best for you in terms of what to eat/drink and quantity. I have water with electrolytes right after any run, and an energy bar if it was a long or hard effort run. About an hour later I have a shake with fruits/soymilk/flaxseed/etc. and a granola bar.

Be smart: If you are feeling lightheaded, dizzy, too hot, too cold (yes, it happens) or start having muscle spasms (usually do to minerals lost through sweat), please STOP RUNNING. Pay attention to how you are feeling at all times. One run is not worth feeling sick or doing even the slightest damage to your body. Take care of yourself, and remember you can always run again tomorrow.


I do this once a week, and I have trouble beforehand every time.  Thinking about such a long swim, and not running on top of that, is hard for me.  But after about 5 laps warming up, I start to really enjoy my time in the pool, cutting through water, pushing forward, and feeling like I’m swimming so fast. Which I know I’m not, it takes me about 70 minutes to swim this distance.
I’m beat by the end of the workout, but it’s a good feeling.

It was raining hard this morning, and I got to the office really late.  It took me forever to take the kids to daycare and drive to work.  We are not used to much rain in Israel, so it seems the world stops when it does rain, traffic gets crazy, the sidewalks are empty of walkers.

My next race is the Jerusalem Half Marathon on Friday the 21st, so tomorrow I officially start tapering, one week.  It should go smooth, I’m getting good at this race preparation stuff.  I don’t feel nervous about the race or worried about tapering.  I was a mess before my first race, and to think that was only 4 months ago…


I know the courses of the Jerusalem races (all distances) are tough, with lots of hills, so I’ll definitely be slower than my last half.
After looking at the course map a few times I finally figured out to look up the elevation chart.

I don’t have nightmares often but I had a nightmare last night, where I was running the Tel Aviv Half Marathon, which is coming up one week from today, and things were getting really rough.

The course was very hilly with lots of turns, it was raining and snowing (although it doesn’t snow in Tel Aviv), I was slipping and falling every block, and because it was so cold I was wearing long pants, a coat and a hat.
I looked at my watch and I was averaging 07:00 Min/KM (11:15 Min/Mile) pace, and I was only on the 3rd KM (less than 2 miles).


I know I had this dream because I’m worried about the race.
Sure I’ve done the training, and I start tapering today, but that’s about all I’ve done.
There are things I haven’t figured out yet, and that are making me nervous:


• Race course: I hadn’t looked at the race course even though it’s been posted online for some time. To be honest, there’s not much to look at, Tel Aviv is mostly flat. Still, I usually check the course in advance and for my previous half marathon I drove through it to see how steep the hills were. This time I didn’t even check it until this morning, didn’t know if there were some hills, or lots of turns, or anything else that could make it difficult. Now that I’ve seen it, it doesn’t look bad at all. 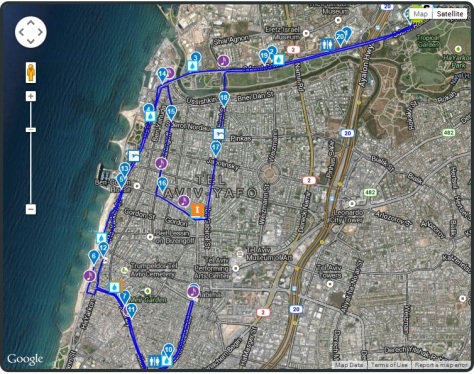 • Getting to the race and parking: Normally I would drive, but for this race, the parking situation will be crazy, it’s a big race, there’s not a lot of parking around that area, and what parking there is will not only fill up fast but it’s a bit far from the start line. Not ideal conditions, and not something I want to deal with right before a race. So I don’t know if I’ll drive and deal with it, or ask a friend for a ride, or take the train.

• Bib pick up: There is no pick up on race morning, so I need to pick up my bib this week sometime between Sunday and Wednesday. Pick up is only in Tel Aviv (read: bad traffic to/from the city, and not a lot of parking), so I will have to go either during my lunch break (which will take much longer than my lunch break) or in the evening with my kids, which means even more traffic/crazy parking at that hour, or ask someone else to pick it up for me.


• Cold weather: I’m not used to the cold and I don’t deal well with it. I really don’t want to be cold before the race, but I won’t have the option to dress warm and then go put those clothes in my car since even if I do drive, parking will be far. I might do throwaway to solve that. And after the race I don’t know how long it will be until I can get back to the car and put on warmer clothes.

• Hot weather: I didn’t say my fears were rational.  As much as I’m afraid of the cold, I’m afraid of it being too hot during the race and that affecting my performance/how I feel. The race doesn’t start until 8:00, that means I’ll be running until 9:45, it could be pretty warm by then. 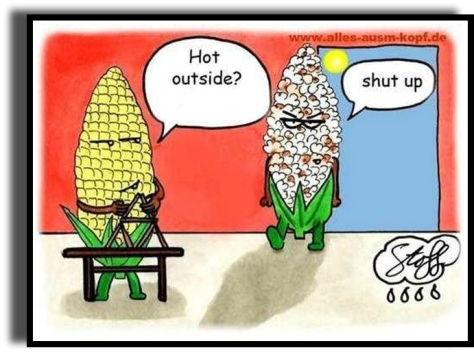 • It will be crowded: There’s no way around the fact that this is a big race, and even hoping it will be very well organized (which is not a sure thing), it will get pretty crowded. The largest race I ran had about 1.500 participants, this race has around 40.000.. I can’t even deal with that number. (OK I just searched for that information, now I’m really freaking out! I thought it was about 20.000…) 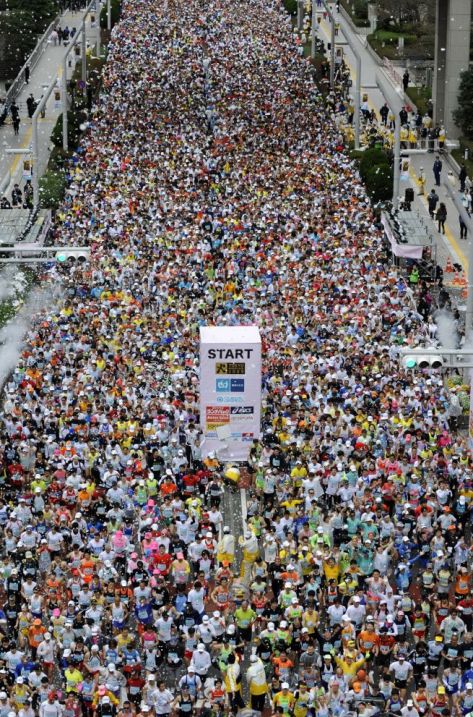 • Bathroom situation: To put it simple, I need to pee right before I start running. It might be psychological but I can’t stand the feeling of an even slightly full bladder while running. So before a race I try to go pee at least twice, once when I get to the race and once right before the race or at least right before warming up. Not sure how that will work here, with 40.000 other participants.

• Running with my phone: Given the size of the race, logistics to get to/from the race, meeting friends, etc., I will need my phone with me. And the thought of running a half with a phone against my tights is just not appealing. 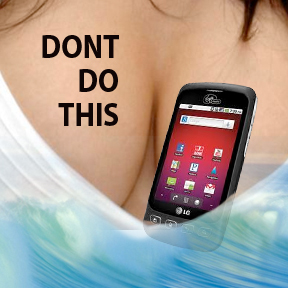 Have you ran any large races?

My first half marathon 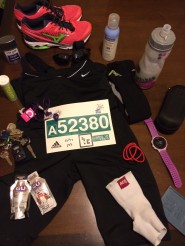 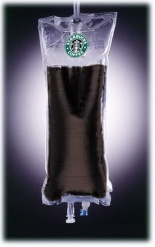 Enjoying the warm sun this time

All my crap… I mean, stuff.

I know I’m crazy (but I’m not the only one), I love all those shoes… 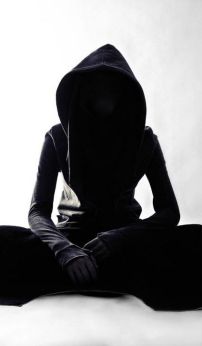